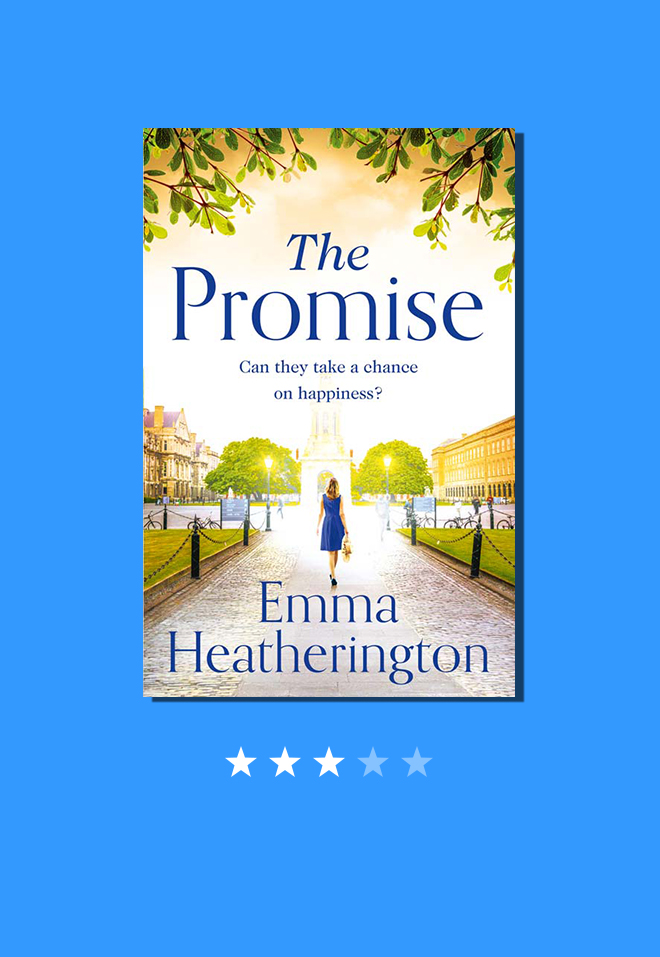 If you love a good ‘will they or won’t they?’, then don’t miss out on Emma Heatherington’s The Promise. With 11 novels under her belt, Heatherington is no stranger to crafting a good love story.

The story begins in 1998, when teenagers Kate and David find themselves thrown together by tragedy as their small town is torn apart by a lethal bomb. Living along the Northern Irish border means local residents are familiar with frequent tension, tragedy, and political and civil unrest. However, up until this fateful summer day, neither Kate nor David had experienced violence firsthand and they don’t know it at the time, but it will shape the course of their future.

Protagonist Kate comes from a working-class Catholic background sharing her home with her Mom, older sister Maureen, and Maureen’s daughter Shannon. Theirs is a tight-knit family unit albeit overshadowed by Shannon’s father Sean McGee’s involvement in a dark and violent underworld. Across town, David, the son of a prominent and outspoken Protestant Minister, has grown up the only child in a large country house sheltered from local political tensions.

When Kate and David find themselves sheltering with 6-year-old Shannon in a shop doorway in the aftermath of the bomb, seriously injured, dazed, and terrified, the scene is set for the unlikeliest of romances. As can happen in moments of shared trauma, a bond is formed between the two, and the eponymous promise to find each other – once safe – is made.

Fast forward ten years and both Kate and David are preparing to attend a memorial. Finally, their paths cross again and what follows is a very tangled, but touching, love story between two similar people from very different backgrounds.

With ten years of living under their belts, both have taken varied paths. Kate is nursing in Dublin while David is about to start teaching in the UK. Kate has worked hard to overcome the trauma of her past, while David still struggles to process the impact of the tragedy on his emotional and mental health. Both are in committed relationships, or so it seems…

Navigating their intense and undeniably bond proves difficult. Kate is constantly preoccupied by old-town loyalties and the trouble a potential romance with David could bring to her family’s door, literally. David on the other hand is torn between the comfortable life he has built with his fiancée and the true happiness he feels only when he is with Kate. Thus, the ultimate, ‘will they or won’t they?’

Like many Irish people, I vividly remember watching the news footage of the 1998 Omagh bombing, the biggest single atrocity in over 30 years of The Troubles. This is the first time I have read a work of fiction based on that tragedy. I never expected that when I did it would be a love story. The passages describing the event and the careful and considered depictions of the long-term effects of the day on its survivors add memorable depth to this story.

Heatherington (pictured left) takes her time to weave this unusual and memorable love story, sure to be a hit with fans of Cathy Kelly and Patricia Scanlan.