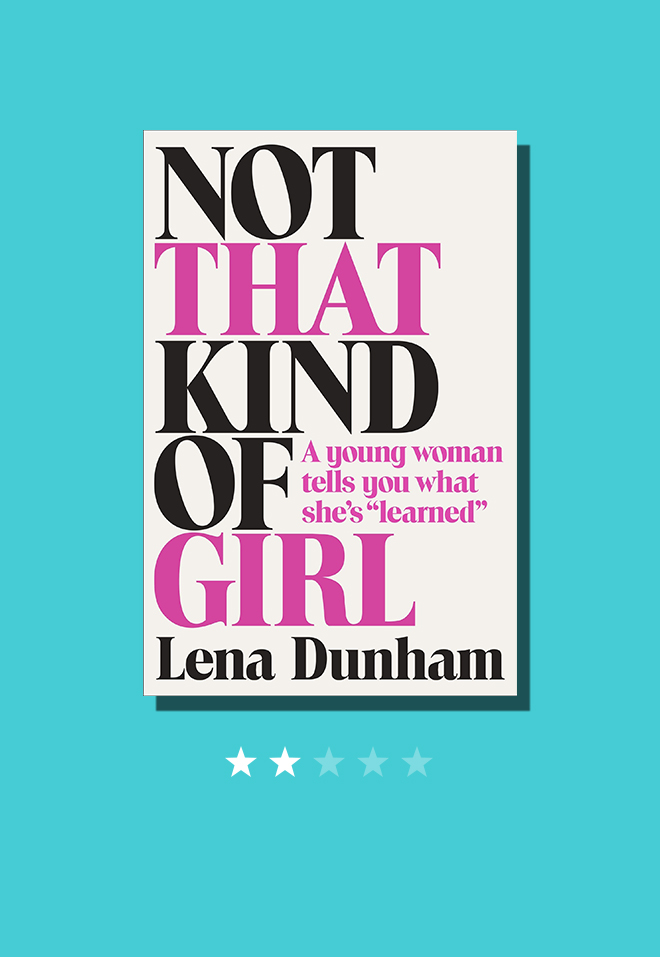 Not That Kind of Girl by Lena Dunham

I hear you Gray!

The first I heard of Lena was in a Gawker article a few years back heralding the arrival of her TV show ‘Girls’ on HBO. It mentioned boobs, internships, mental health, and realistic female forms. You know what the last one means right? It means a TV show where the women, or at least some of the women, are under 6 ft and possibly have less than a C cup, and acne.

At the start most of the media coverage focused on the fact that Lena’s character Hannah frequently appeared on screen – in the nip. I don’t know why this was considered so shocking. I’m guessing it was because Lena’s body doesn’t match the version of female beauty that the media worships. A whole lot of brainwashed people fell off their couches in shock, blogged asking was it necessary, commented that it was for shock value alone. The rest of us just felt a mild sense of relief – Look! A normal shape – and got on with the show.

I watched the first few episodes and found it refreshing. That wore off about halfway through season 2. Mainly because I began to find Hannah, the lead character played by Lena, grating. Which probably should have been my first clue that I’d find her book, a collection of essays, the same.

Not That Kind of Girl: A Young Woman Tells You What She’s “Learned”. Young indeed, Lena is still under 30. She produces, directs, and acts in her TV show ‘Girls’, has a bunch of Emmy nominations under her belt, and two Golden Globes. Which is why I was willing to read the autobiographical book of someone who is just 29.

And now that I’ve read it I realise that there is a lot of Lena in Hannah: a NYC-based creative struggling to make a living in an industry she adores, but that doesn’t necessarily adore her. Most of her life seems to have been lived in a privileged arty bubble, which I guess goes a long way to explaining why she seems to alienate a whole bunch of people.

For me, her saving grace is that she has the cop on to acknowledge her upbringing was a quite far out in left field and probably an acquired taste.

Her essays wander through childhood memories, her numerous therapy sessions, some awful sexual encounters, her time at summer camp, and her first “real” job (folding baby clothes in an overpriced childrenswear boutique somewhere posh in Manhattan). Towards the end there’s a weird little angry bit hinting at all the scandalous dirt she would love to dish on a bunch of older men in the TV industry. That might be a better read.

The book wasn’t for me. I found some parts of it interesting, but I think that was because I’m nosey as opposed to anything to do with enjoying the writing. For the record, I’m happy Lena is doing all that she’s doing. Long may she continue to use her voice and vision. The more diversity we have on our screens the better. I just think I’d find her hard work, and I ran out of patience with her essays.